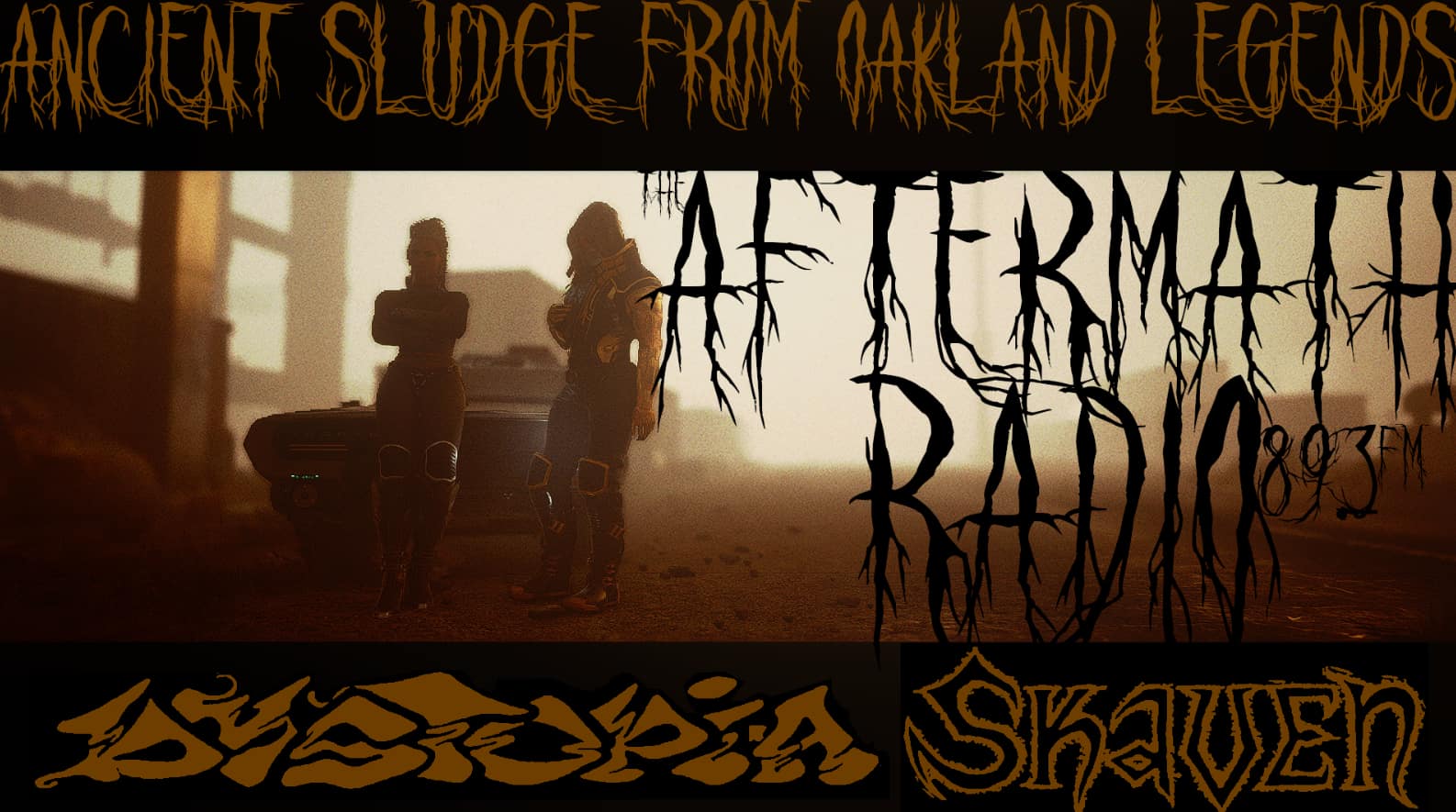 This changes the theme of Radio Vexelstrom to a darker, dystopian crust “oldies” station with anti-industrial themes. keeping somewhat true to the overall theme, this makes the station heavier, angrier, and dirtier, the songs have all been remastered by me to fit today’s quality of music, all of these songs are at a minimum of twenty years old and weren’t the best quality recordings even on their master recordings from the studios, the main bands are from the Oakland area in the mid-late 90s, so they are full of social and political topics, and since its 2077, they would be considered oldies. And they all firmly believe in DIY lifestyles. Oakland is the reigning champion city of anti-establishment action in the U.S. and the bands that came from that area during that angry era are some of the most politically charged bands in the extreme punk scene and I’ve had the honor of seeing some of them, and partying with others, after they went off to start new bands and are genuinely nice, and happy, people despite the entirely misanthropic themes of their music. all of these bands have either played together, joined forces together, or released split EPs/LPs with each other so they all mix together fantastically well and have the same overall raw, primal, metallic PUNK vibe.

Dystopia may be THEE godfathers of sludgy crust music, equally at home with both extreme metal/punk bands and lo-fi hip-hop artists throughout their career in the 90s, they have played with bands from all genres and their angry political songs, and use of samples similar to hip hop artists at the time, bridged the gap between the two scenes in Oakland and made for one hell of a fun time when they weren’t protecting their communities from police brutality and corruption. They disappeared for about 20 years going to separate bands but came back to record a final album sometime in the last 5 years, all members have once again gone on to form new bands. All three of their albums are available for a name your price type deal at the tank records bandcamp.

Skaven are the Rat Gods of Metallic Crust, they released a number of small splits with Dystopia as they were best friend bands(members from both went on to form the Doom Metal band Asunder together) and other bands but most notably was their discography album available(still) for free from their bandcamp. They are named after the rat race Skaven from Warhammer 40k and their songs are a sludgy mix of dirt, metal and melody with dark themes like mental instability and drug abuse as well as sociopolitical messages but not as direct as Dystopia. People who have seen them live have noted that its not really a Skaven show until some drunk idiot ends up lighting themselves on fire.

Sea of Deprivation are a three piece band from Phoenix, AZ and they play music similar to both Skaven and Dystopia but with a more personal theme, formed from members of the short lived band Misanthropic, they recorded one album titled Catharsis in Disharmony, an album so amazing it took the literal creators of crust itself, Amebix, to get back together after 25 years just to maybe? dethrone it from the top in my opinion. The band ended with the suicide/death of the Singer/Guitarist, and Founding member of both Sea of Deprivation and Misanthropic, Phil Hansford shortly around the release their album.

Bongzilla today play a slow stoner brand of southern metal, political sometimes, and always about smoking the reefer(who can blame them?) but the songs I’ve chosen to use are from their early collection album Shake: the Singles, which was really just a collection of early demos and splits from the mid 90s that were eventually put together and released as a full length in the year 2002. All of those original albums are long gone and were made in a DIY fashion so there were limited amounts to begin with. These songs are rare and hard to find and unless you buy this specific album, their non-demo counterparts on the newer albums do not sound anything like these versions, these are grimy and crusty, angry and extremely punk, closer in sound to Cannabis Corpse than today’s Bongzilla, basically, these are from when they were young, dirty, angry crusty punks instead of responsible adults. I can’t find an in-stock merchant that sells the album but maybe ebay, even youtube only has 2-3 songs from the entire album, you can however, buy the bands other releases through their bandcamp directly.

Looking for opportunities to update the Cyberpunk 2077? Then you are on the right place! We offer a wide range of various mods for even very specific requirements. Cyberpunk 2077 AFTERMATH RADIO Mod help to improve a game and make it more interesting. Why not to take an offer, especially when it’s free of charge. Take a look at the descriptions and think of the ways the AFTERMATH RADIO mod can help you solving the issue or becoming more efficient. Then simply click on Cyberpunk 2077 AFTERMATH RADIO Mod download and follow the installation steps. If you change your mind and mods don’t appear to be as useful as expected, feel free to try other ones because there are no download limits. This few simple steps will lift your game to the upper level – what can be better that upgrading your game personally? Break all boundaries and develop your game easily. Take the best that you can and don’t look back – you must be orientated to the future and new experiences. That’s the only way to stay ahead of everything. If you see it as your goals, it’s definitely now or never!