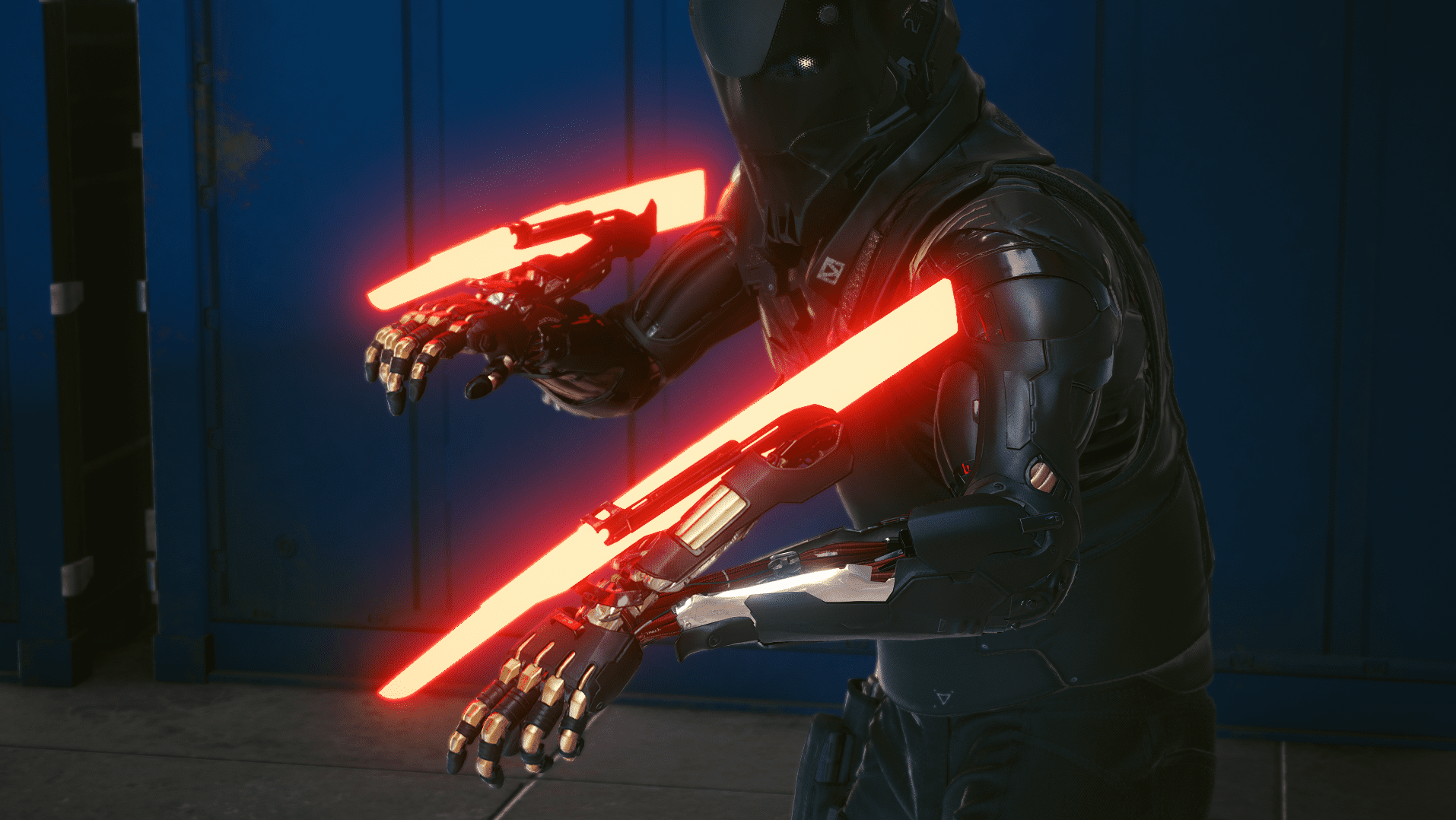 Cyberware replacement arms for male and female characters. They have many skins to choose from, for all cyberarms.

Version 3.3:
– The Arasaka Mantis arms have been remade for both male and female characters. They now open up like the unmodded Mantis arms.
– A few Mantis blades have been added for the new arms, as the old blades are incompatible.

Version 3.1:
There’s a forearm version of the Arasaka Arms now. At the moment they are female only. Added to the Mega Pack, and as Optional download.

Version 3.0:
– The mod now has an installer version with all files included.
– Added Claw Blades back to the Blade Library.
– Added Short Claw Blades.
– Added one arm skin, Megabreath, created by Dragonalex.
– Couple of fixes for the Misc Monowire arms.

Content:
Arasaka Skin Library (aa_ArasakaArms_Skin_) – Has all the skins for the Arasaka Cyberarms. Male and female characters have separate files, install only one skin for each. Every download that replaces arms includes the default Arasaka skin, so this is an optional download.

Default Replacement arms (aa_ArasakaArms_Default_) – Will replace your character’s default arms, before they install any cyberarms at the ripper doc. That means the arms will show straight from character creation. They will also replace the right arm when using the Launcher cyberware, preventing it from being one arm only.

Gorilla arms (aa_ArasakaArms_Gorilla_) – Replaces Gorilla Arms cyberware. Has optional versions that only replaces one of the arms, left or right.

Launcher arms (aa_ArasakaArms_Launcher_) – Replaces the Launcher cyberware when your character has it installed. Left arm only.

Monowire arms (aa_ArasakaArms_Monowire_) – Replaces the Monowire cyberware. Will remove nails from the player characters, otherwise the Arasaka arms would have nails.

Blade Skins library (aa_ArasakaArms_MantisBlade_) – Collection of all different blades and skins. Requires the main Mantis mod (aa_ArasakaArms_Mantis_). Includes Oda’s glowing blades and the Psycho version without glow. Will change blades for both male and female characters since they use the same files. Glowing blades can be affected by mods that remove Bloom from the game.

Decals (aa_ArasakaArms_Decals_) – Decals with several brand options, including Arasaka and Militech. They replace and hide the Weapon Grip cyberware that Victor installs at the beginning of the game. Will show on characters even if you have no cyberarm installed. Conflicts with mods that remove the Weapon Grip. There are decals for both arms, and for left or right arm only.

Remove Weapon Grip (aa_RemoveWeaponGrip) – This is an optional file that will hide the hand cyberware that Victor installs at the beginning of the game. If you already have a mod that does this, you don’t need this one. Conflicts with the decals.

Miscellaneous Arms (aa_MiscArms_) – A collection of different non-Arasaka arms that can be used separately or together with the main mod. This includes, among others, a few options of normal arms with nails for the Gorilla cyberarms.

Credits:
rfuzzo – CP77 Tools.
alphaZomega – Scripts for 010 Editor and Noesis.
l2ahman – Tutorial on how to remove submeshes.
Wathon – Figuring out how to add custom multilayer file.

Looking for opportunities to update the Cyberpunk 2077? Then you are on the right place! We offer a wide range of various mods for even very specific requirements. Cyberpunk 2077 Arasaka Cyberarms Mod help to improve a game and make it more interesting. Why not to take an offer, especially when it’s free of charge. Take a look at the descriptions and think of the ways the Arasaka Cyberarms mod can help you solving the issue or becoming more efficient. Then simply click on Cyberpunk 2077 Arasaka Cyberarms Mod download and follow the installation steps. If you change your mind and mods don’t appear to be as useful as expected, feel free to try other ones because there are no download limits. This few simple steps will lift your game to the upper level – what can be better that upgrading your game personally? Break all boundaries and develop your game easily. Take the best that you can and don’t look back – you must be orientated to the future and new experiences. That’s the only way to stay ahead of everything. If you see it as your goals, it’s definitely now or never!