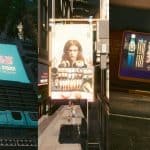 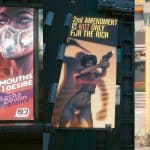 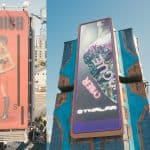 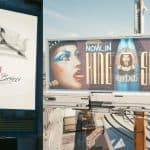 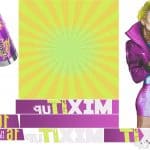 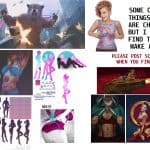 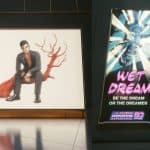 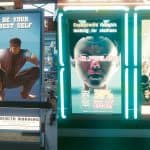 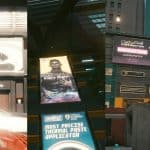 Redrawn original ads, icons, 1 sticker and posters in to less revealing versions to complement the censor option in the game.

Can be used with or without the censor option, it alone won’t affect character nudity, only the state of 2D art in the world.

Kept as much as possible of original stuff, yet making it less revealing, clothes,
poses, hiding private parts for both genders, in some cases made the art visually
completely different, with a hint on original theme, so it would be more classy.

Majority of added art parts, besides 2 Ghost in the Shell movie characters I partly used,
gloves and sushi – are my drawings above original ones for this mod, not just swap of
existing illustrations from net, so it’s created to fit in Night City, keeping in mind while
done, how it would look with each other, not alienating as something you see
outside irl, to keep it lore friendly.

NOT EVERY CHANGE IS ON SCREENSHOOTS, DIDN’T FIND ALL AT MY TESTS, SO PLEASE POST
YOUR SCREENSHOOTS OF NEW THINGS BESIDES REGULAR USER PICS, IF YOU KNOW IT’S NEW

Things missing: Near Lizzie’s bar Cyberbabes poster. Wanted to add panties or shorts, but no uncooked files for them yet. This is a rare thing, shouldn’t be on any building 20m wide. And MixITup ads and vending machines. This one is bothering me, since it’s often seen. The files for it are uncooked unlike the Cyberbabes, but the vending machine changes on specifically this one are just ignored in-game and the billboard version just crashes the game when compressed in BC3 and is missing with other formats. I’m uploading the remade version Miscellaneous here, without a visually seen dick as original and in shorts, for those who would be more lucky in fixing it to show up in-game and not crash.

WHY?
I guess some would ask this and if you are eager to, then please read some of my thoughts on this subject as an answer:

1) It’s obviously good when you have choice. We already have character censor option in the game, this just finishes most of the job, besides tv pre-rendered ads. And I’m sure there are people who would love to mix their game censor, keeping billboards all over city less revealing, yet nudity with 3d characters in those few occasions happening in-game. Or completely censoring game with the option + this mod. Streaming or playing while kids/relatives are near and randomly glaze, feeling discomfort on your/their side, since outside of the art on ads, there’s no actual 18+ stuff you could randomly encounter (even in Jig-Jig street while not entering the dildo shop) and you can skip killing, if that’s also an issue, so for those occasions walking/driving around the city, chilling without things to worry about.

2) Personally for my taste, I don’t like when something is feeding me up with porridge using own spoon. The illustrations for me were too straight forward, without any food for mind and analogies you could come up with, while looking on them and text. It can be naughty, but 2077 or 3077, or 4077 – doesn’t mean humanity degrades to losing taste, and spamming nude fat man titties and cocks on buildings. Humanity can be corrupt, degrade in slams, killing and raping in outskirts of Night City, but when you look up, from the ground. You see other life, a vision of world in which the corps live, more aesthetic then underground reality, covering truth as if it doesn’t exist instead parasiting on it more hypocritically. This is very different from 1) and can argue with CDPR or original author’s (if it’s identical to the game style) vision of this Cyberpunk universe and I would never openly complain about it, that’s why it’s in thoughts and not an outrageous screaming all over social media. As well as that’s why instead of arguing, I created what I wanted to see instead as an option and what people could use if they want. Well not completely what I wanted, since I didn’t go far from original in most cases, as tribute to default ideas. Frankly it’s still a lot more revealing then I could, but then it would mean changing thematic of ads completely. So between 2 “evils” – I made this version. Didn’t spend tremendous amount of time on drawing parts on each individually, except few faces, since it’s low res ads after all and there
is a lot of them, but I think they still aren’t disgracing original quality as an optional censor mod, I hope so.

Looking for opportunities to update the Cyberpunk 2077? Then you are on the right place! We offer a wide range of various mods for even very specific requirements. Cyberpunk 2077 MODEST ADS 2077 Mod help to improve a game and make it more interesting. Why not to take an offer, especially when it’s free of charge. Take a look at the descriptions and think of the ways the MODEST ADS 2077 mod can help you solving the issue or becoming more efficient. Then simply click on Cyberpunk 2077 MODEST ADS 2077 Mod download and follow the installation steps. If you change your mind and mods don’t appear to be as useful as expected, feel free to try other ones because there are no download limits. This few simple steps will lift your game to the upper level – what can be better that upgrading your game personally? Break all boundaries and develop your game easily. Take the best that you can and don’t look back – you must be orientated to the future and new experiences. That’s the only way to stay ahead of everything. If you see it as your goals, it’s definitely now or never!