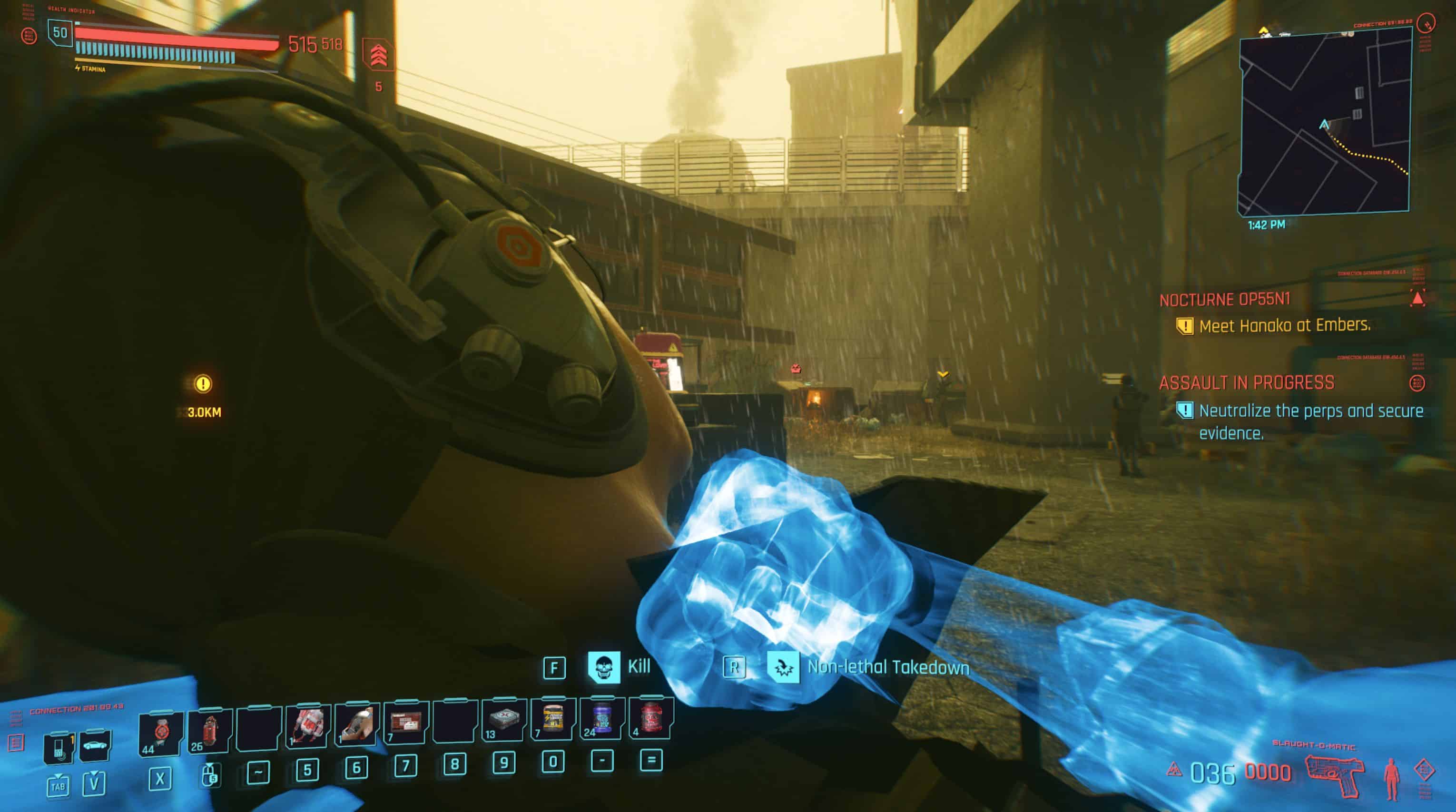 Fixes two bugs/strangeness with optical camo to make all three versions (rare, epic legendary) actually hide you from enemies (in stealth) and make you harder to hit because of evasion (in combat).

Change 1: Rare and Epic Optical Camo will make you invisible to enemies (when not in combat), just like Legendary version.

There’s a couple of bugs with Optical Camo. The obvious one is that Rare and Epic versions seem to have no effect on enemies detecting you, while the Legendary version works fine. I’ve tested and found no difference in yellow or red detection time from enemies with Rare and Epic. Looking into the game files and records, all three versions grant a “Cloak” effect, but Legendary additionally has a “PerfectCloak” effect which makes you invisible.

I’m not sure if CDPR’s intention is that Legendary hides you completely and Rare and Epic do nothing (so not a bug), or if Rare and Epic are supposed to just increase detection time but it’s bugged. I think most players expect it to hide them completely for 5/10/15 seconds, so that’s what this mod does – it gives all three the “PerfectCloak” effect. I think it’s still decently balanced because of the different durations.

This is definitely a bug and a bit harder to notice since the items don’t even say what they actually do. All three versions of Optical Camo increase your evasion stat (Rare +33, Epic +66, Legendary +100). You can see the change in the stats menu page (click on armor) when the camo is active. For me my evasion goes from 2 to 37 with Rare on, instead of the 35 I would expect, but we can’t see how the final stat is calculated.

Evasion makes enemy bullets miss you more often. Unmodded, the stat increases for all three versions, but Evasion is broken when Legendary Camo is active. You can see it work easily with Epic version, as the incoming damage rate from enemies goes down quite a bit. With Legendary active, you actually get hit a bit more (haha). The problem is that the entire part of the hit calculation that factors in the evasion stat (actually deciding the trajectories of bullets) is skipped if you are invisible (from “PerfectCloak”).

So the fix for this is just to not skip that part of the code when you are invisible.

Looking for opportunities to update the Cyberpunk 2077? Then you are on the right place! We offer a wide range of various mods for even very specific requirements. Cyberpunk 2077 Optical Camo Bug Fixes Mod help to improve a game and make it more interesting. Why not to take an offer, especially when it’s free of charge. Take a look at the descriptions and think of the ways the Optical Camo Bug Fixes mod can help you solving the issue or becoming more efficient. Then simply click on Cyberpunk 2077 Optical Camo Bug Fixes Mod download and follow the installation steps. If you change your mind and mods don’t appear to be as useful as expected, feel free to try other ones because there are no download limits. This few simple steps will lift your game to the upper level – what can be better that upgrading your game personally? Break all boundaries and develop your game easily. Take the best that you can and don’t look back – you must be orientated to the future and new experiences. That’s the only way to stay ahead of everything. If you see it as your goals, it’s definitely now or never!