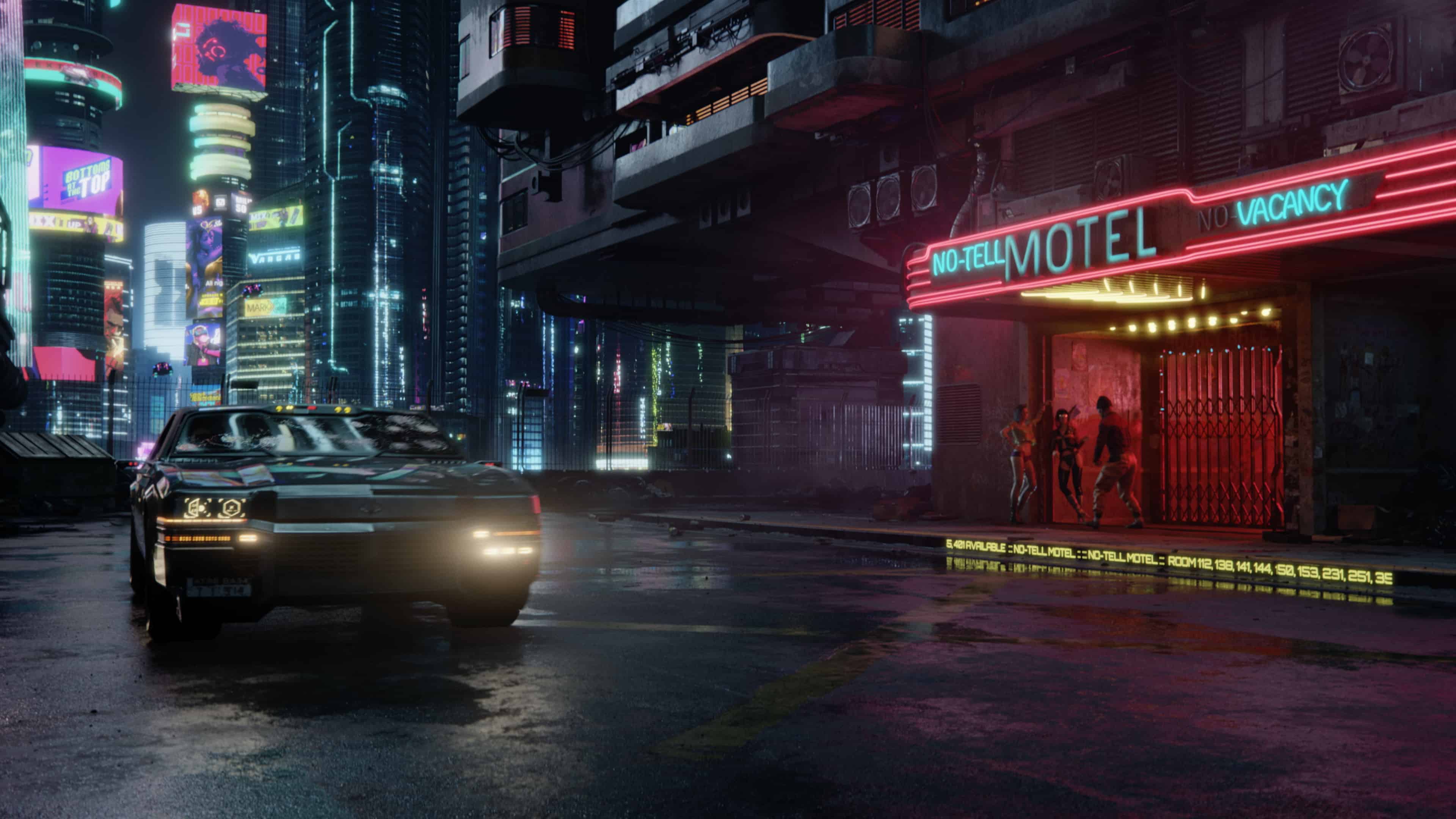 Cyberpunk 2077 takes place in the year 2077—which you probably didn’t need us to tell you—and it’s set within Night City, a fictional city between San Francisco and LA (as described here) that already exists in the Cyberpunk pen and paper RPG created by Mike Pondsmith. Punks and corporate stooges of all varieties wander these foggy, once Mob-ruled streets, and by 2023, corporations are openly warring for them. Cyberpunk 2077 will show us what happened to the city in the aftermath of that war.

Thanks to some awesome crowd technology, the Cyberpunk 2077’s Night City feels alive and bustling. In our first demo of the game, it was incredible watching V walk through streets and seeing hundreds of characters walking, playing, talking, and fighting. It’s not clear how dynamic this world is, however. We passed by a crime scene in one neighborhood, and we’d like to know whether that crime scene will ever get cleaned up or if it’s a static landmark in this area.

The city is, by all accounts, massive. It features six districts with no loading screens between them. To help you get around, there are vehicles you can drive in either first or third person. It was hard to get a sense of how realized this part of the game is—we’re not sure if there will be all the depth of simulation you see in something like Grand Theft Auto V’s driving and traffic. But it did look impressive and smooth.

Speaking to VG24/7, CDPR said the autonomous function allows you to summon your car at will, instead of trying to remember where you parked. Let’s hope it’s better at finding its way than Geralt’s horse, Roach. You’ll also have access to a garage to store the cars you own, but it’s unclear if you’ll be able to own them all or if a cap will be set.

In a different interview with VG24/7 at E3 2019, lead quest designer Pawel Sasko went into more detail about the districts outside the Badlands. “Players can leave Night City and just explore that area—an area that is mostly sort of destroyed basically after all the droughts and everything that happened in the 50 years from 2020 to ’77. And you can explore that, there are specific quests prepared for that, also open-world content, so that’s definitely covered. It’s not only the city that you’re visiting.”

Looking for opportunities to update the Cyberpunk 2077? Then you are on the right place! We offer a wide range of various mods for even very specific requirements. Cyberpunk 2077 What does Night City look and feel like? Mod help to improve a game and make it more interesting. Why not to take an offer, especially when it’s free of charge. Take a look at the descriptions and think of the ways the What does Night City look and feel like? mod can help you solving the issue or becoming more efficient. Then simply click on Cyberpunk 2077 What does Night City look and feel like? Mod download and follow the installation steps. If you change your mind and mods don’t appear to be as useful as expected, feel free to try other ones because there are no download limits. This few simple steps will lift your game to the upper level – what can be better that upgrading your game personally? Break all boundaries and develop your game easily. Take the best that you can and don’t look back – you must be orientated to the future and new experiences. That’s the only way to stay ahead of everything. If you see it as your goals, it’s definitely now or never!