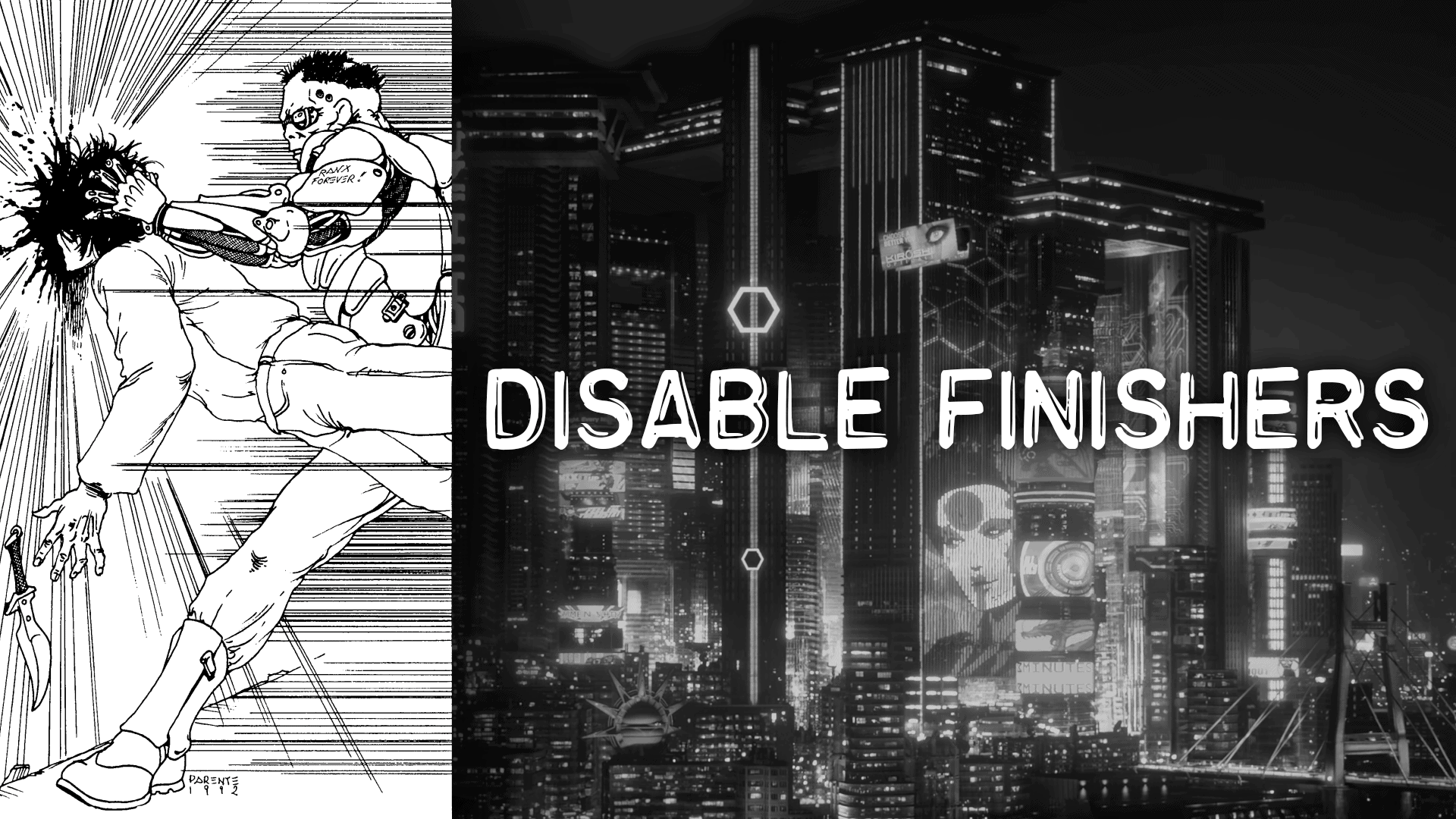 Tired of forced animations? Me too.

Going on a killing spree with a katana is a lot of fun, but the immersion and flow easily breaks when you have to deal with a forced animation almost every time you kill someone with a heavy attack. Compared to the mantis blades animation, the other ones aren’t that bad; but in the long run it can get really annoying.

The only workaround I found was to equip the implant that makes all your weapons non-lethal, however that removed the fun of slicing people to pieces seeing as your blade made people fall asleep instead… Now you can slice away without having to worry about people surviving!

This is a very simple mod that disables finishers for:
Katanas
Mantis Blades
Gorilla Arms
One- and Two-handed Clubs
Hammers
Fists

There is also a version available that ONLY disables the Mantis Blades finisher
Update: By request there is now another version that INCREASES the frequency of finishers. It will now attempt to trigger finishers even when using light attacks, and disregard any difference in power level as long as your attack deals more damage than the enemy’s current health.

NOTE: Only use ONE of the versions, they are more than likely NOT compatible with each other!

HOW TO INSTALL:
Install redscript (or update if needed)
Download ﻿the version of the mod you want
Extract the “r6” folder in your main Cyberpunk 2077 directory; if you can see folders named “bin” and “r6” etc. you’re in the right place!
﻿(…/steamapps/common/Cyberpunk 2077)

Looking for opportunities to update the Cyberpunk 2077? Then you are on the right place! We offer a wide range of various mods for even very specific requirements. Cyberpunk 2077 Disable Finishers Mod help to improve a game and make it more interesting. Why not to take an offer, especially when it’s free of charge. Take a look at the descriptions and think of the ways the Disable Finishers mod can help you solving the issue or becoming more efficient. Then simply click on Cyberpunk 2077 Disable Finishers Mod download and follow the installation steps. If you change your mind and mods don’t appear to be as useful as expected, feel free to try other ones because there are no download limits. This few simple steps will lift your game to the upper level – what can be better that upgrading your game personally? Break all boundaries and develop your game easily. Take the best that you can and don’t look back – you must be orientated to the future and new experiences. That’s the only way to stay ahead of everything. If you see it as your goals, it’s definitely now or never!