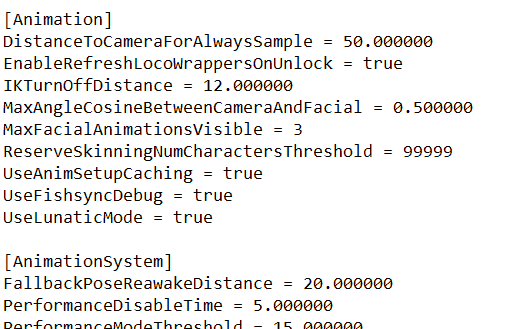 List of the ~1107 hidden settings that can be changed in the INI file + the default values for them, along with a list of ~113 EXE parameters used by the game.

Here’s a list of mostly all the INI settings used by v1.04 and their default values, originally dumped by my friend Infogram on PCGamingWiki.
(I’ve been given permission to post them here)

To change the value of any of these settings, follow the instructions given at the beginning of the list:
create/open the “engine\config\platform\pc\user.ini” file & add the section name + setting name/value inside it.

Some of the tweaker/patcher tools already available let you change a small number of these variables, but now you can edit all ~1107 variables as you like, without needing to modify your game EXE – hopefully allowing your changes to persist between any game updates.

For example instead of patching your EXE or using a tool to disable TAA, you can just add the following to the engine\config\platform\pc\user.ini file instead:

No descriptions are provided for any of these besides their names, but if you find any interesting settings please let us know about them in the Posts section!

Feel free to reuse this list in any mod/tool that you wish to create too!
Though if you do release any modded INIs please use a different filename than user.ini – the game will read any file inside “engine\config\platform\pc\” as long as it ends with .ini, IMO ideally user.ini should only be for settings changed by the user themselves, it’d be best if each released mod tries using a unique filename (like DisableTAA.ini for an INI that disables TAA) to reduce chances of any conflict/overwrites.
(also, make sure not to change any of the existing INIs that were shipped with the game neither as those are likely to be overwritten during game updates, and changing any game files can break the GOG updater too)

EDIT: Also included is a list of EXE parameters used by Cyberpunk2077.exe that were also extracted by Infogram, not all of these are fully functional though and some (such as “-editor”) will cause a crash on startup, but maybe someone will find something useful there.

(for example, launching the game with “-noHUD” parameter should remove all HUD elements)

Looking for opportunities to update the Cyberpunk 2077? Then you are on the right place! We offer a wide range of various mods for even very specific requirements. Cyberpunk 2077 INI settings and EXE parameters list Mod help to improve a game and make it more interesting. Why not to take an offer, especially when it’s free of charge. Take a look at the descriptions and think of the ways the INI settings and EXE parameters list mod can help you solving the issue or becoming more efficient. Then simply click on Cyberpunk 2077 INI settings and EXE parameters list Mod download and follow the installation steps. If you change your mind and mods don’t appear to be as useful as expected, feel free to try other ones because there are no download limits. This few simple steps will lift your game to the upper level – what can be better that upgrading your game personally? Break all boundaries and develop your game easily. Take the best that you can and don’t look back – you must be orientated to the future and new experiences. That’s the only way to stay ahead of everything. If you see it as your goals, it’s definitely now or never!