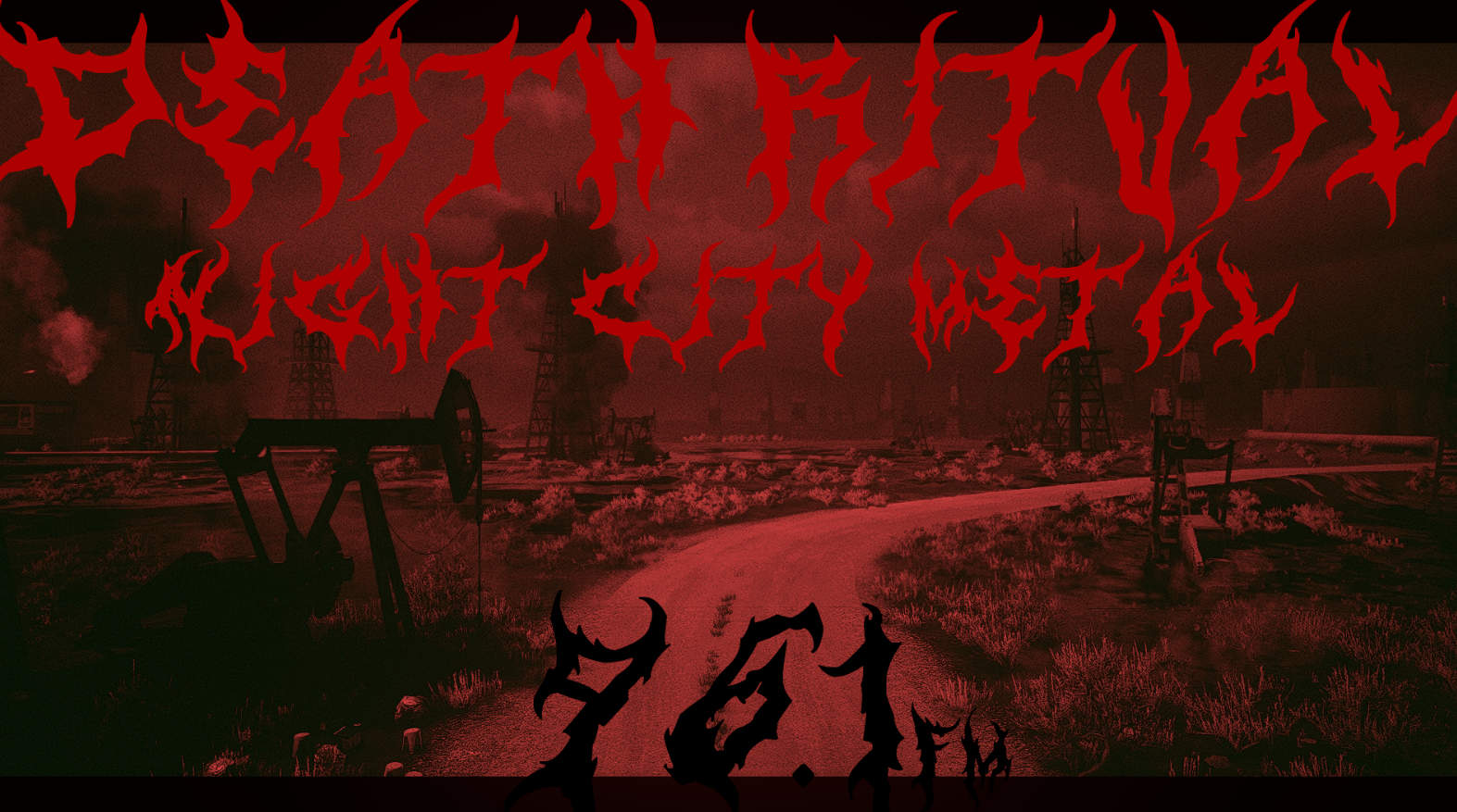 The final of the top 3, I wanted better metal, thats pretty much all there is to it. The original black metal was basic shoegaze stuff, and not even the best of the basic, thankfully they used non traditional themes for the songs but you’d think black metals sound would have evolved slightly over 60 years instead of staying the exact same as it was in the 80s… So I switched everything out for legendary metal artists that created masterpieces of extreme metal albums in their respective metal genres, or flat out created a new genre and made significant changes to the metal world that would last forever. This was probably the easiest and most difficult to create because Ive listened to extreme metal for over 2 decades now and my library is extensive and metal itself is extensive. I needed music that not only was good, but would still be seen as a style to emulate almost a century into the future. Metal is basically todays classical music, but I feel I chose the perfect bands to not only represent the station, but Night City itself, so there’s not really any music that sings about forests or trolls or any of that stuff, this is music that represents civilizations rise and fall in current times, the destruction of the world around us for personal gain, and the eventual consequences of those actions, even the couple somewhat traditional black metal I selected is based off mankinds knowledge of science and space instead of satanic or magical themes.

Agalloch is a Black Metal folk themed band from Portland, OR. USA. They mostly use the traditional themes in black metal but they tend to keep it more human related than magical, they often use the themes of classic writers like Henry David Thoreau and Ralph Waldo Emerson in their lyrics and sometimes quote them. They incorporate native american themes and sounds in some of their most atmospheric songs, have songs about nature, poetry, and space and time opposed to satan and what not. Ive chosen two of their heaviest songs, both are about space and time and from the Album “The Serpent and the Sphere” but they are still by far the most “melodic” of the songs, and they are the longest songs of the bunch but some of the shortest for the band itself as they often create 12 minute long epics, and have released a 22 minute long album that was one song, and they are well produced, no fuzzy raw black metal stuff, this is soundscape/movie quality music. They disbanded in 2016 and the members went on to start their own solo projects or join other bands.

At The Gates are from Gothenburg, Sweden and are considered the fathers of the “Gothenburg death metal” sound, they didn’t start the melodic death metal genre but they are the ones that brought it to the world and made it possible to become as large and popular as it is today. These guys started up in 1990 as At the Gates after being called “Grotesque” and doing some average black/death metal songs for a year or two prior to renaming themselves. They recorded 4 albums before 1996, the last two of which are the albums that brought them to the world and started what would eventually become known as “gothenburg death metal”. They disbanded in 1996 and members went on to form/join many bands such as Disfear, Skitsystem, The Haunted, and Cradle of Filth. Almost 20 years after the release of their last album they released a new album titled At War with Reality and have been going strong ever since, releasing 3 albums so far since their reunion the most recent came out just this year on July 2nd, 2021, they received the swedish grammy in 2015 for the album At War with Reality, solidifying their place as legends in the death metal scene.

Cattle Decapitation are a grindcore/deathgrind band from San Diego CA. USA. Formed in 1996 and still touring and releasing albums today, they started off as any other grindcore/death metal band, the themes included misanthropy and anti-animal torture/testing etc. A couple of the members are vegetarian but they are often portrayed as militant vegans thanks to the lyrics and crappy journalists. In 2012 they released Monolith of Inhumanity and it changed their sound for the better and brought their music to a wider selection of extreme metal fans, simply by adding an additional style of vocals to the songs, and a lil bit of melody to the overall song structure, which only made them sound even more extreme and brutal. This switch up in sound continued on through their follow up albums, The Anthropocene Extinction, and Death Atlas, two of their best albums to date and their most in your face about the destruction the human race has caused and the dangers we will face in the very near future, they hold nothing back in accusing the human race of the damage we’ve done and I feel they best represent the dystopian rage that metal would have in a place like Night City in 2077.

Fall of the Bastards are a melodic blackened death metal band from Portland OR. USA. They released only one full length album in 2004 but it was a masterpiece of Blackened Death Metal that can, and does, stand up to the test of time, dueling melodic and thrash inspired guitar riffs, with duel vocals from their vocalist Jason Voorhees, yeah, that Jason Voorhees.. their themes include death and suffering, so it fits pretty well with the overall despair of Night City and having a singer themed after a horror movie serial killer is much more of an urban theme that would end up being standard in futuristic metal instead of the traditional Tolkien themes that metal has been known for. Fall of The Bastards members moved on to join/start bands such as Aldebaran, Oakhelm, L’Acephale, Splatterhouse, Menacer, Dekapitator, D’gul, Engorged, and more.

GroinChurn were a Johannesburg, South African grindcore band, and one of the first to obtain a record contract overseas, they played mostly grindcore but would sometimes incorporate a reggae style into their songs. I only used one song for this station, its one of their more deathmetal/grindcore songs but when i eventually release my full 11 radio station overhaul mod it will include a switch out of the VDBs two reggae songs in their hotel to two of GroinChurns reggae/grindcore songs, keeping true to the VDB culture but adding more musical variety, lets be honest now, every culture loves metal..

Obsidian Kingdom is a post-black metal band from Barcelona, they play some very hard to classify music, sometimes it sounds like creepy radiohead, sometimes it sounds like extreme blast-beat metal, but overall they could be put into the black metal catergory, but an evolved form of it, definitely a future sound of metal that proves it doesn’t always to sound extreme to be extreme. I’ve chosen a song off their album Mantiis, a sort of black metal concept album about a dark experience, without listening to the album in its entirety many of the songs would be out of context so the one I’ve chosen is the most independent of the album, it a fusion of black metal and lounge jazz in a very unique way and I feel it adds another unique sound to what metal would be like, as well as ties the doomy noir jazz station i modded together to add to the overall theme that all these radio station mods have in common, which is the true dark grittiness that night city is under the shiny surface.

Looking for opportunities to update the Cyberpunk 2077? Then you are on the right place! We offer a wide range of various mods for even very specific requirements. Cyberpunk 2077 Death Ritual FM Mod help to improve a game and make it more interesting. Why not to take an offer, especially when it’s free of charge. Take a look at the descriptions and think of the ways the Death Ritual FM mod can help you solving the issue or becoming more efficient. Then simply click on Cyberpunk 2077 Death Ritual FM Mod download and follow the installation steps. If you change your mind and mods don’t appear to be as useful as expected, feel free to try other ones because there are no download limits. This few simple steps will lift your game to the upper level – what can be better that upgrading your game personally? Break all boundaries and develop your game easily. Take the best that you can and don’t look back – you must be orientated to the future and new experiences. That’s the only way to stay ahead of everything. If you see it as your goals, it’s definitely now or never!